The woman, eight months pregnant, did not have a valid anticovid-19 test, so the hospital refused to treat her, and the miscarriage occurred at the doors of the medical center.

After the incident, the authorities officially apologized to the patient on Thursday and announced sanctions for those responsible, something unusual in China.

The events occurred in Xi'an, a historic city in the north of the country with 13 million inhabitants, which has been under strict confinement for two weeks after the appearance of a coronavirus outbreak, following the "zero covid" strategy promoted by authorities in order to eradicate all infections.

The incident was recounted on January 1 on social networks by a niece of the woman, who explained that the hospital staff refused to admit the pregnant woman for two hours because she did not have a recent negative covid test (less than two days).

In the message she is accompanied by photos and video of the pregnant woman, sitting on a plastic stool outside the hospital and surrounded by a pool of blood. 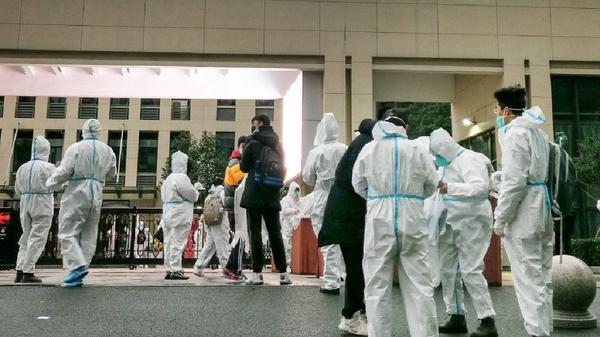 The niece wrote that her aunt did have a negative test, but that she had expired a few hours earlier.

The message has been deleted from social networks since then, but it was seen before 290 million times on the WeChat network, for example, and the outrage of Internet users has not been long in coming.

This Thursday, the director of the health services of the city council publicly apologized at a press conference.

"I apologize to this patient" for the "lack of access to health care" she needed, he said, explaining that he had been ordered to provide compensation to the woman.

Shortly before, the director of the hospital was suspended and "responsible persons" from the patient admission department also had to leave their posts.

These measures are unusual in China, where, however, several officials have been sanctioned in the last two years but for not having applied anticovid measures severely enough.

On Wednesday, the authorities explained that fast access routes to hospitals will be opened for the population at risk, such as pregnant women and patients with serious illnesses, without citing this case.

The case of this abortion does not seem to be something isolated. Another Xi'an resident claimed Thursday on social media that her 61-year-old father had died of a heart attack three days earlier, after being turned away by several hospitals.

Her message, read more than 180 million times, said that they tried to enter several hospitals for eight hours in vain, because her father had severe chest pain. When he was finally admitted to one "the doctor said that he had waited too long" and that if the anticoagulant medication had been administered within two hours of the onset of pain, the man could have been saved.

Covid-19 infections in China are low compared to other countries, but they have risen in recent weeks and authorities are concerned due to the proximity of the Winter Olympics from February 4 to 20.

According to official figures, the country has only registered 100,000 cases since the start of the pandemic, at the end of 2019, and 4,636 deaths. On Thursday, 189 cases were reported across the country, including 63 in Xi'an.

In this city, the confined inhabitants have complained of lack of food. The authorities assured on Wednesday that the epidemic peak was about to be controlled in the town.

The facial treatment with which Vicky Martín Berrocal beautifies her skin: "I needed it"
Telva 10 beauty tricks of Italian girls that you will want to know